To Live in a Royal Way

In our time, in order to relax in royal chambers or feel like a maharaja, it is not necessary to have an impressive title. Fortunately for us, the gates of castles, palaces and palazzos are open for everyone who can afford to pay for this pleasure and prices are not as high as you would expect. For those who want to feel like a princess or a king, we offer our selection of seven of the most beautiful hotels-palaces in the world.

A smile appears as a phantom with a first sigh on the plane’s ramp. ‘Oh, good!’, the cells of the tortured brain cry out in chorus. Now, wherever you go, the state of enthusiastic grace will pursue as a second “I”. Why? Because it’s Ty!

Since 1939, the Kingdom of Siam was officially called the country of free people (Mueang Thai). Buddhist philosophy, multiplied by monarchy wisdom, gave amazing results. Nine supreme rulers (from Rama I to Rama IX) developed the country, carried out reforms and flexibly built diplomatic relations. During the world redistribution, Thailand avoided colonial dependence. The late departed Bhumibol Adulyadej reigned for seventy years, and his subjects worshiped him. No monarch can boast of such a long service record.

The country of smiles is not a cliché. The life of the kingdom surprises others with the brightness of colours, festive elation, nature, culture and ways that are filled with magical energy. 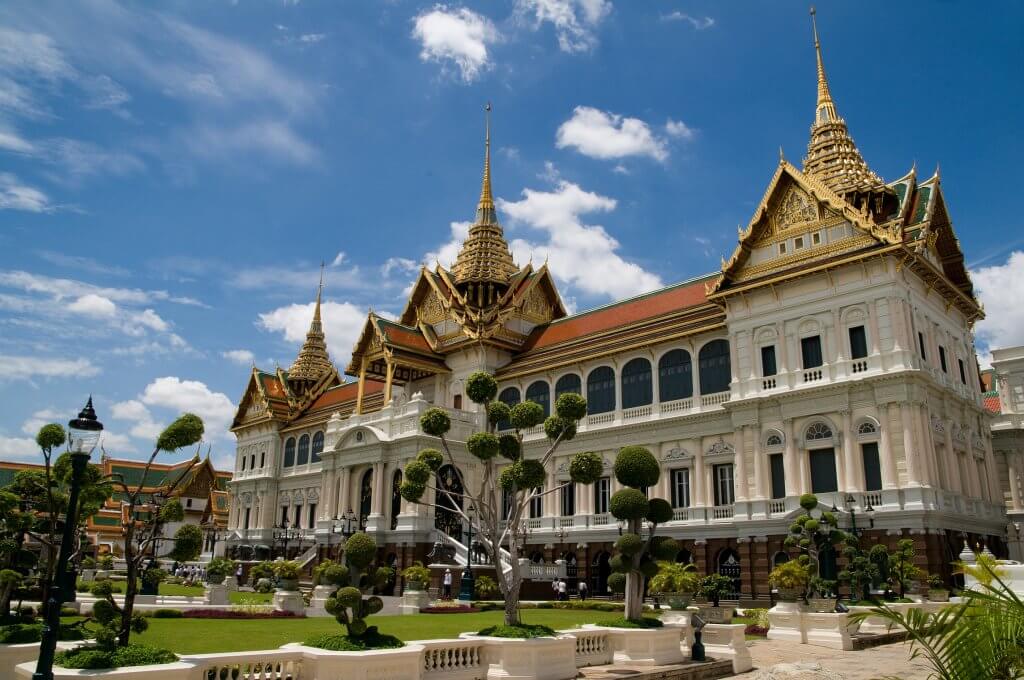 Bangkok – view from above

In search of happiness, we will go to the capital. The real name, Krung Themp, is a shortened form of Bangkok’s real name, which exceeds 150 letters and is entered into the Guinness Book of Records as the longest geographical name. The cryptic encryption means city of angels, happiness, abundance, abode of God Indra and the keeper of nine treasures. The best way to deal with this pile of meanings is to take it from the top.

The sketches of skyscrapers are written across the ups and downs of the landscape. During the times of the great Asian boom (70-90 years), when concrete stalactites grew on the site of slums, Baiyoke Sky Hotel (309 m) went up – until 2016, the highest in Southeast Asia. Major additions include Lebua, Banyan Tree, Red Sky and MahaNakhon Tower Pixel Building (which bypassed Bayoki Sky Hotel by 5 metres); all as steep as they are grand. Towers compete in height, design, the number of restaurants, the scope of panoramic views and decibels of ecstasy, which evokes a view of the capital from heights of 84 or 72 floors.

Little Sathorn Unique Building was unlucky. The financial crisis broke out before it was completed and the project was abandoned. The derelict ‘haunted house’, on 49 floors, has turned into an abnormal zone of adrenaline rush. Despite the authorities’ bans, extremists use the building for base jumping and parachute jumping. Only, Shhh!!! – we did not say anything.

An alternative to skyscrapers is the Temple of the Golden Mountain (Wat Saket), standing on a hill. There is no elevator, so, with the backdrop of the city accompanying you, you will have to climb the 300 steps.

Wherever you go, you will rest on the stupa. In translation from Sanskrit, stupa is the ‘crown’; in a philosophical sense, the personification of the purity of thoughts. In the utilitarian, it is a monument or repository of sacred relics. On the world scale, the conductor of the energy of good to the force field of the earth. The monarchy (without fail) and 95% of the inhabitants of Thailand profess Buddhism and the elegant conical structures and statues of Buddha are scattered throughout the cities and villages.

The architecture is stitched with the symbols of ancient religion. The Royal Palace in Bangkok is sheltered by a multi-tiered roof resembling the sacred Mount Meru. The residence is protected from evil spirits by stone guards and sculptures of the supreme deity – an emerald (actually jade) 46-meter, lying Buddha awaiting Nirvana.

In the oldest monastic school of Wat Mahatat, everyone is allowed to take a course of meditation and to join the great wisdom (classes are also conducted in English). Turtle Monastery of the temple Wat Prayoon is famous for the colony of Tortillock, who chose ponds around the 60-metre stupa. For refreshments, babies will be helped to purify their feeding karma.

Immersion in the capital

In Bangkok, as in living water, you need to dive in with your eyes open. The dive point is in the solar plexus on Khao San Road, where it dazzles the eyes with souvenir shops, antique shops, advertising of snack bars and massage parlours. The tourist here will find inexpensive accommodation, food, drinks, entertainment and shopping.

Jeans, shoes, beach apparel and items, T-shirts, bags and wallets – on Kao San, there is no difficulty finding a real bargain. Just do not ask if it’s a real Gucci, Wrangler or Trussardi.

Soi Cowboy is a zone for adults. In Baccara, Deja Vu, Sheba, Go-Go and hundreds of other bars, strawberry lovers gather. Stripteases, lesbi-shows, piquant acrobatic programs and dances on the pylon are available.

Local patrons will gladly accommodate and talk with the farang (newcomer) ‘for life’, using a couple of English phrases. The dancer who has attracted your attention will pay attention to you for a paid cocktail. The main thing is not to confuse boys and girls – in a country of universal tolerance, it’s easy.

In Thailand, people are open to occasional meetings and conversations. A single traveller will find fellow travellers to continue travelling north to Chiang Mai, south to Malaysia or east to Cambodia or Vietnam. There will always be someone who shares his/her impressions of visiting Pattaya, Phuket and the numerous islands of the Andaman archipelago.

About Pattaya and Phuket

With scores of beach tourists, the two main resorts of Thailand are becoming happiness zones for those who are saved from cold, darkness and winter depression. Freelancers of all kinds adore these places for cheapness and an atmosphere of freedom and carelessness. You just need a computer, an extension cord, a hammock and some soup tom-yum, shrimp, beer and fruit. It is a place to remember your youth. Children, fed fruits and sun, are also in for a treat.

Pattaya – for those who seek the first place of entertainment. Discos and clubs work around the clock. For those whose holiday is not a vacation without excursions, there is a temple of truth, elephant villages, crocodile farms, a floating market, rafting along the river Kwai and tireless trips to ancient Ayutthaya and Cambodia. True, you will have to swim in the hotel pool or go to the islands.

Phuket is a paradise for fans of eco-recreation. The sea here is blue and transparent and the beaches are white and clean. You do not have to go anywhere, with diving, snorkelling and other joys on the water at your disposal.

Where the sea is blue and the ‘Beach’ is sandy

Jungle, coral reefs, emerald lagoons and waterfalls have become firmly established in the minds of the townsfolk as components of tropical paradise thanks to the film ‘Beach’. Millions of spectators, along with Leonardo DiCaprio (performer of the main role) discovered a terra incognita named Thailand. The film literally deprived the island of Pee Pai Lei, where the shooting took place. After the release of the picture (2000), hundreds of boats from the neighboring Pi-Pi-Don, Krabi and Phuket nuzzled daily on the sands of the beach of Maya Bay, unloading crowds of people wishing to walk the “Leonardo trail”, to be imprinted against the backdrop of replicated landscapes.

In salvation from pilgrims, the island has been declared a national park since 2004. No hotels or bungalows. However, this does not save the romantics who are willing to pay for excursions with an overnight stay, in order to spend the night right on the sand. The waterfall, from which the heroes of the movie, is Haeo Suwat Falls, located four hours drive from Bangkok. Masses allegedly at Khao San Road were actually filmed in Krabi and Phuket. Hotel Back On The On is also preserved, however, is now called ‘The Memory at On On Hotel’.

The shooting made a lot of noise. The beach of Maya Bay was levelled and extended with bulldozers. Living vegetation in places was cut down and replaced with artificial palm trees. Twentieth Century Fox Corporation paid a huge fine to the Environmental Protection Agency of Thailand. Salvation came, oddly enough, in the form of a devastating tsunami, after which the island recovered on its own. The consequences of human deeds have been corrected by nature, but it also happens vice versa. 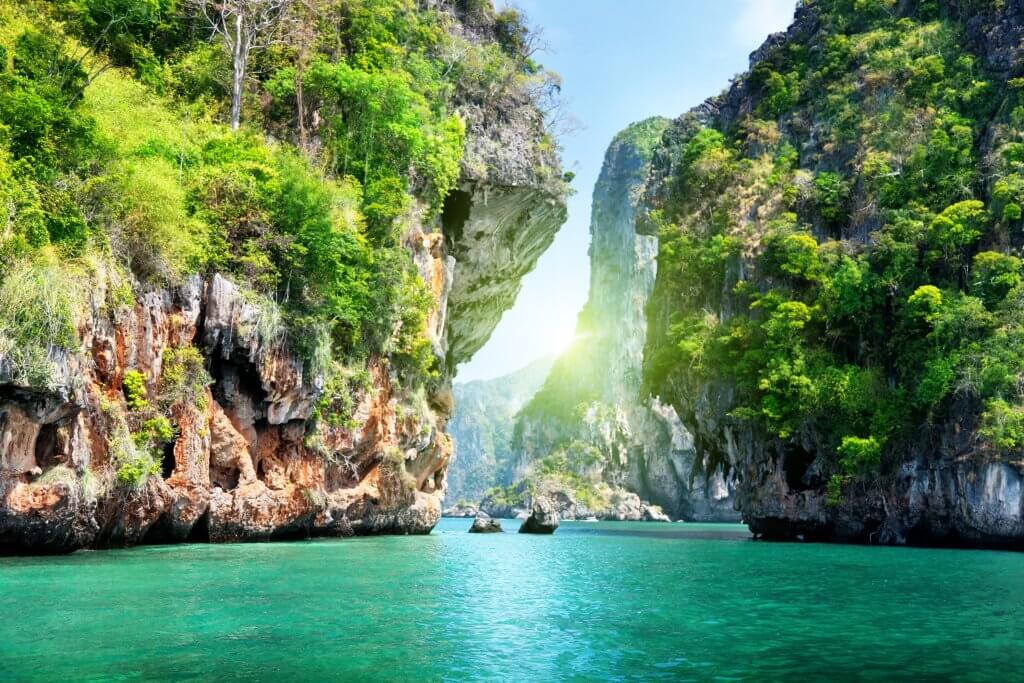 rocks and sea in Krabi Thsiland

Glitter and poverty of transvestites

What if a person becomes uncomfortable in a body given to them at birth? Try to correct the error, of course. This is how Buddhism treats people and does not see anything terrible about a change of sex. In Thailand, a visitor is easily trapped. How, for example, can you react to a bank employee with coloured eyelashes who presents as a woman, but was recently a young man? This is the kind of story that Europeans may seem disgusted by. Thai citizens perceive it calmly and turn it into a fairy tale.

The plot is simple. A handsome, but poor, young man from a godforsaken village leaves for the city, works at three jobs, affords an operation (first plastic, and then sex change), turns into a beautiful girl, performs in a show, earns a lot of money and provides for those in the native village. In the best scenario, this real hero works in the famous theatres ‘Alcazar’, ‘Tiffany Show’ or ‘Calypso’.

Enchanting performances, stunning costumes and awesome beautiful performers – this must be seen.

Treasure, are you mine?

What else can you lose your head for if not jewellery? In the provinces of Trat, Kanchanuri and Maung-Pyre, rubies, sapphires and zircons are mined by hand in open pits. Processed in Thailand, whose work is cheap, they are combined with gems from Australia, Kenya and Sri Lanka and the stones are bought up by famous jewellery houses. They shine in the products of Tiffany or BVLGARI.

The Changbaturi province market is popular with tourists because of its proximity to Pattaya (250 km). In the covered areas, potential buyers sit under canopies, and sellers offer sapphires with an overflow of dark blue in blue-green and rare-yellow or blood-red rubies of various shapes and sizes. If you decide to buy, you will immediately be satisfied with the stones that you choose (frames are ready or made to order). This is all done without a hint of deception. Here, you can get a certificate of authenticity. If it later turns out that the stone is a fake, the company that issued it will reimburse any losses. 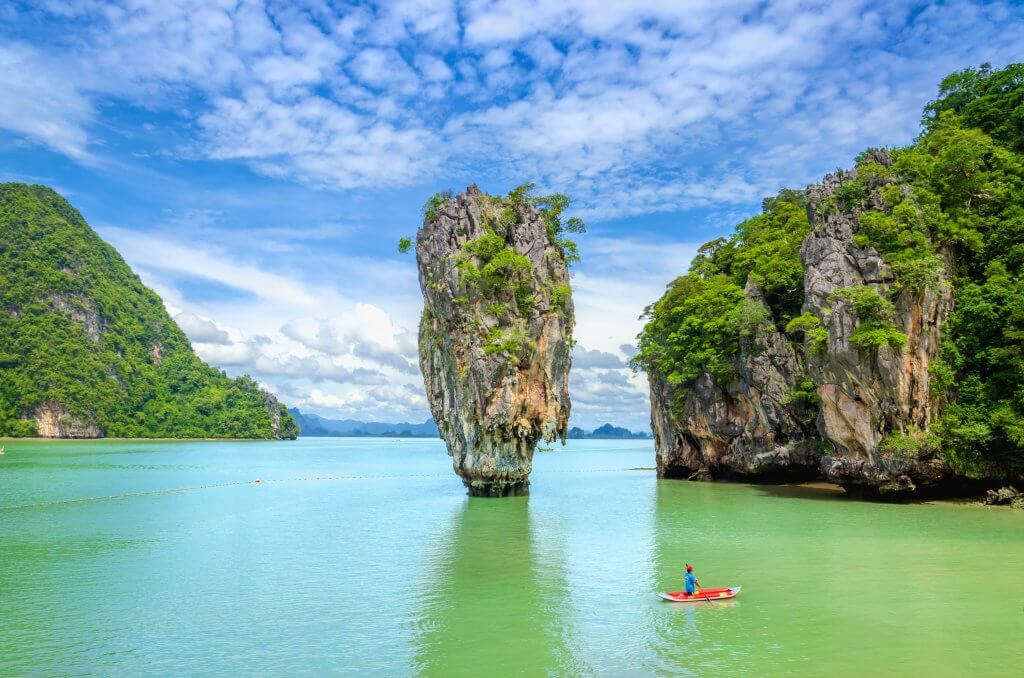 In the fabulous Kingdom of Siam, there are a thousand reasons for happiness. Look closely at how the taxi driver, waiter, salesman, stewardess or massage therapist expresses emotions. In fact, they use thirteen basic smiles.

Get infected with a positive virus and take it home with you as the main souvenir. Smile, ladies and gentlemen!