THE CAPITAL OF FOG ALBION

Big Ben and Westminster Abbey photographed from across
the River Thames.

After nearly three centuries, Samuel Johnson would surely recognise all the familiar places in the city, stretching along the banks of the Thames, and today could drink coffee in Covent Garden or stroll through the city’s narrow alleys to churches and stables reminiscent of the Middle Ages. And, science fiction writer HG Wells could now attend the debates in Parliament, applaud the musicians at Albert Hall, or listen to a military band in the Royal Park.

London was founded in  AD 43, during the invasion of Britain by the Romans, led by the Emperor Claudius. The Romans settled in the territory of the modern district of the city, built a bridge over the Thames and created the famous commercial centre, which attracted many merchants. Many centuries later, the terrible plague of 1665 claimed the lives of 70,000 Londoners, and a year later, 4/5 of the city’s buildings were turned into ashes by a terrible fire. Some of the oldest buildings were restored according to the preserved drawings and, today, the city is an incredible mix of centuries-old buildings of various eras. London, permeated with respectability and the spirit of English traditions, is lively, colourful and very green. 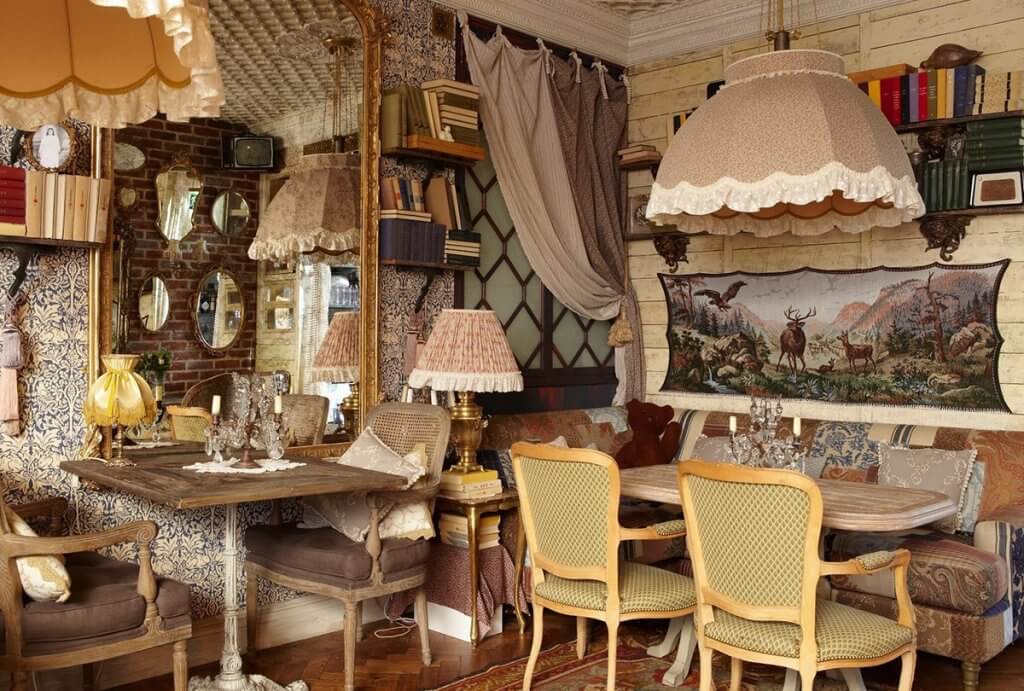 What is the first thing to spend time at in London if you only have a few days? Of course, the Tower. Today, it is not only the oldest building that has been preserved in the city, but also the most valuable vault, where most of London’s history is concentrated. Over the centuries, the fortress was changed and completed, gradually approaching the appearance that can be seen today. The oldest part of the Tower is the White Tower, built in 1078 as a fortress to protect against attacks, as well as the personal residence of William the Conqueror. Be sure to take this place in because, here, you will find the sceptre of the English king Edward VII, adorned with the world’s largest diamond, Cullinan-1, weighing 530.2 carats. Here, among other treasures of the British Empire, is also kept the Kohinoor diamond (186 carats), famous for its sad history, adorning the crown of Queen Elizabeth.

Tower Bridge – the most famous bridge in London, it is both adjustable and hanging. In the central span between its two towers at a height of several floors is a gallery, offering breathtaking views to the west and east of the city. The floor in it is made of glass and collects many who want to take a selfie on it. 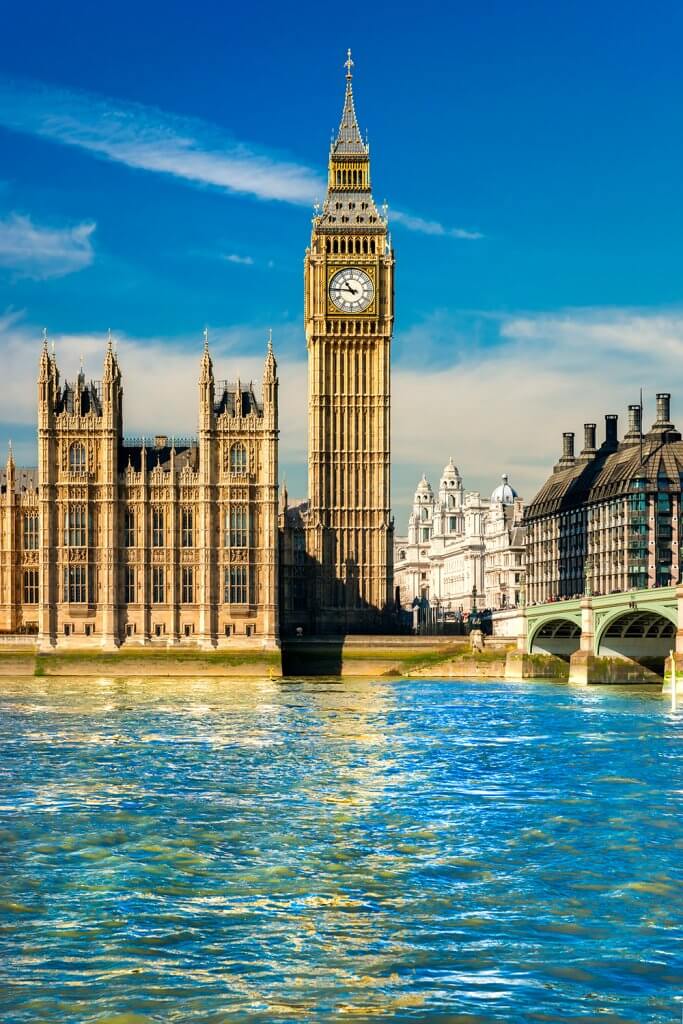 The Big Ben, the House of Parliament and the Westminster Bridge at night, London, UK.

Westminster Abbey – the traditional place of coronation and burial of English monarchs. Also, here lie Samuel Johnson, Tennyson, Browning, Dickens and many other famous writers and poets. The modern Parliament building was erected in 1850 on the site of the original construction, which was almost completely destroyed during the fire of 1834. Today, meetings of the House of Lords and the House of Commons are held here and, on certain days and hours, anyone booking a tour can visit them and see first-hand how important laws are adopted for the country.

The most famous part is the Big Ben Clock Tower, which received its name from the name of the 13.5-ton bell. It is known, without exaggeration, to the whole world and is the hallmark of the city. The Big Ben clock has shown the exact time since 1859. 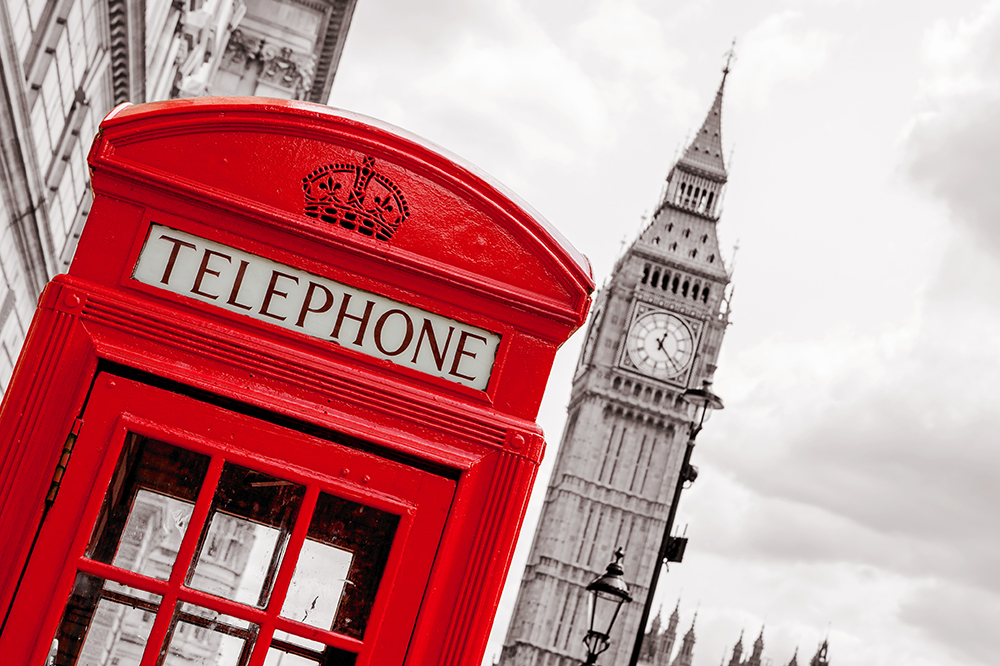 Buckingham Palace – the official London residence of the British monarchs. When the queen is here, the standard flies over the roof. Part of the premises of the palace is open to visitors, usually one or two months a year, when the queen leaves for her summer holidays. To see the changing of the guard (11: 00-11: 30) at Buckingham Palace, you need to come in advance, as there are usually a lot of people in attendance and there is a chance that, in a large crowd, you simply won’t see beyond the heads in front of you. 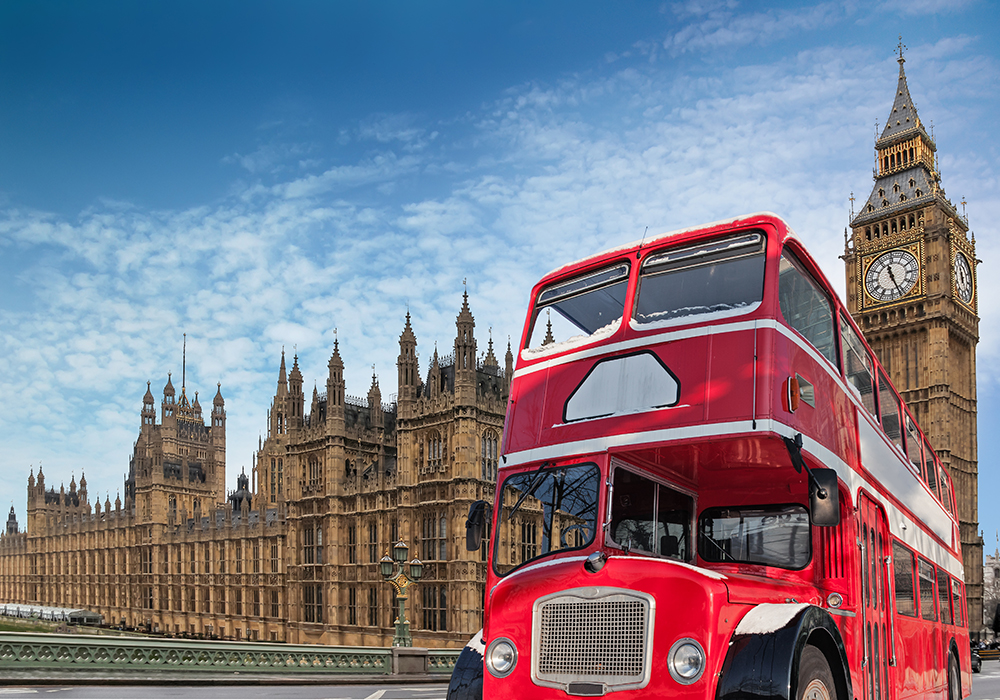 London england dawn breaking over the city of westminster, with the clock tower of Big Ben over the light trails of red london buses on the street.

In London, well-developed public transport is the metro, the famous double-decker buses (double-decker), trams, railway, water transport and, of course, a taxi. Many Londoners have never thought about buying a personal car, and every year the number of cars per capita is steadily decreasing. But, the cost of parking is growing and today is recognised as the highest in the world. If you have decided to rent a car, get ready to lay out from £2.20 to £4.40 per hour, if you are lucky to find free space. The parking penalty is £80, or £130 if you have not paid for entry into central London (£11.50). 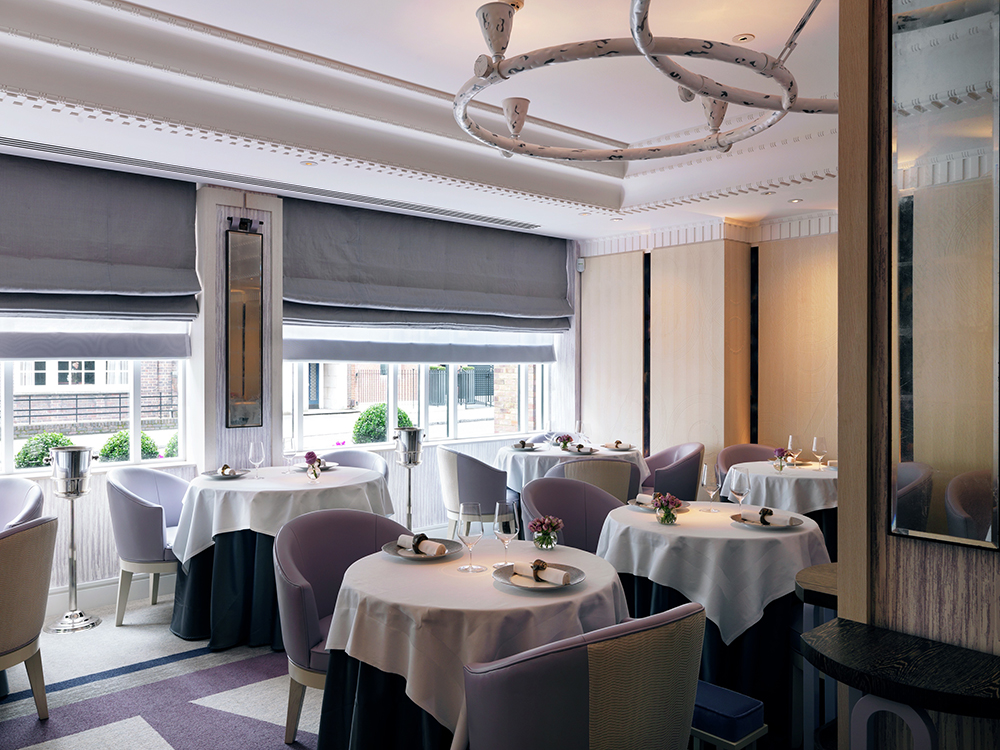 30,000 shops and boutiques in London will tire even the most persistent shopaholics. Oxford Street is considered the most famous place for shopping in London, but Londoners and tourists also enjoy the popularity of Bond Street in Mayfair and Knightsbridge, which houses Harrod’s famous shopping centre. Londoners, themselves, prefer to visit Selfridges, a high-end department store, while shopping in Harrod’s is now firmly the love of Arab and Russian buyers. Many worthy boutiques can be found in the same Mayfair, on Carnaby Street in Soho and on Kings Road in Chelsea. 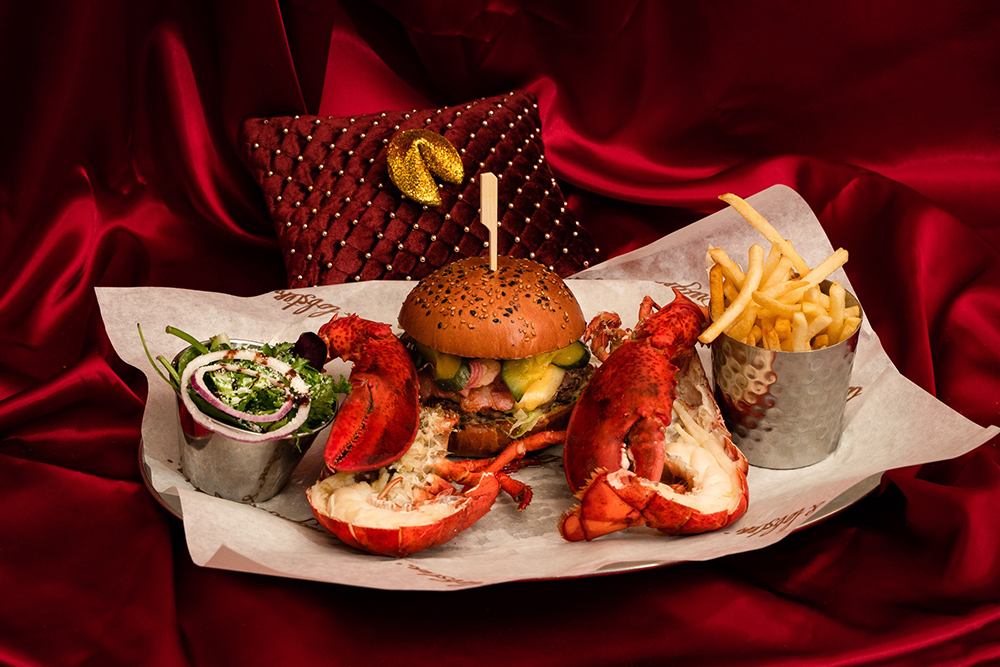 The chain of restaurants, Burger & Lobster, owned by Russian restaurateur Mikhail Zelman, serves only steaks and lobsters, accompanied by lettuce and French fries. A serving costs £20. Be sure to order potatoes with truffles!

Being in London and not going to the restaurant of the King of English cuisine is absolutely impossible. It is only institution in the city with three Michelin stars. Try a piece of fried foie gras with caramelised chicory – and you will certainly return here again. 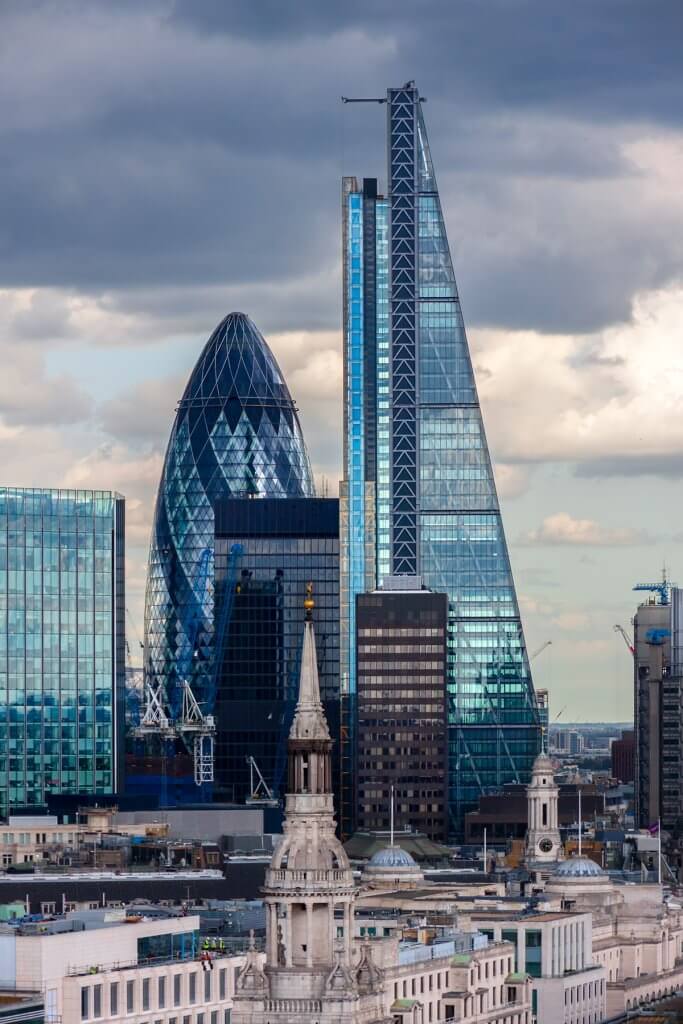 The City of London skyscrapers

Marivanna is an establishment in prestigious Knightsbridge. The unusual design of the restaurant, reminiscent of a traditional house in a village or an apartment of a grandmother and grandfather with samovars and old photographs, attracts visitors of various nationalities. They say that even Prince William and the Duchess of Cambridge once tried borsch here.

London’s first gastropub to receive a Michelin star, The Harwood Arms offers a two or three course dinner menu for £22.50 or £27.50.

The restaurant was founded by the owner of Wagamama and Yauatcha, Alan Yau. With modern Chinese cuisine, excellent dim sum and, perhaps, Sting at the next table, it is a full-on experience. Specialties are silver cod soaked in champagne and Chinese honey and Peking duck with royal beluga caviar.

Four years ago, the founders of the restaurant came up with the idea – to combine modern art, music, video and design with fine dining. The result: continued popularity and rave reviews from critics and lovers of everything unusual. High-quality French dishes from Chef Pierre Gagnaire, desserts and cocktails await you. The signature dish is langoustine with tartar sauce, stewed or roasted.