A JOURNEY THROUGH TIME. Top 10 Best Castle Hotels in Europe

How does it feel – to experience the life of a monarch or a queen for a little while? In present times, you don’t require a real high-profile title to do this. All you need is to become a guest of one of the many ancient castles and palaces across Europe, which have opened their gates to everyone. Castle-hotels, with their legends, secrets and fascinating stories about their former owners, where the atmosphere of the Middle Ages is still felt to this day, have become synonymous with exclusive vacation for those who still believe in miracles and wish to turn their lives into a fairy tale. Ancient walls, incredible panoramas and well-groomed parks of these castles allow you to feel the fabulous spirit of antiquity and travel back to the distant past for a short time. You will not get bored here – golfing, hot air ballooning, luxury spa programs, Turkish baths and saunas, excursions in the surrounding area, horse riding, fishing … the list goes on and on. You will plunge into the everyday castle life, taste selected wines and appreciate the art of the best chefs, who will offer you the most exquisite recipes of traditional local cuisine. We have selected for you the ten most interesting, in our opinion, castles in Europe, where time seemingly ground to a halt, with the luxury and beauty preserved in their original form. 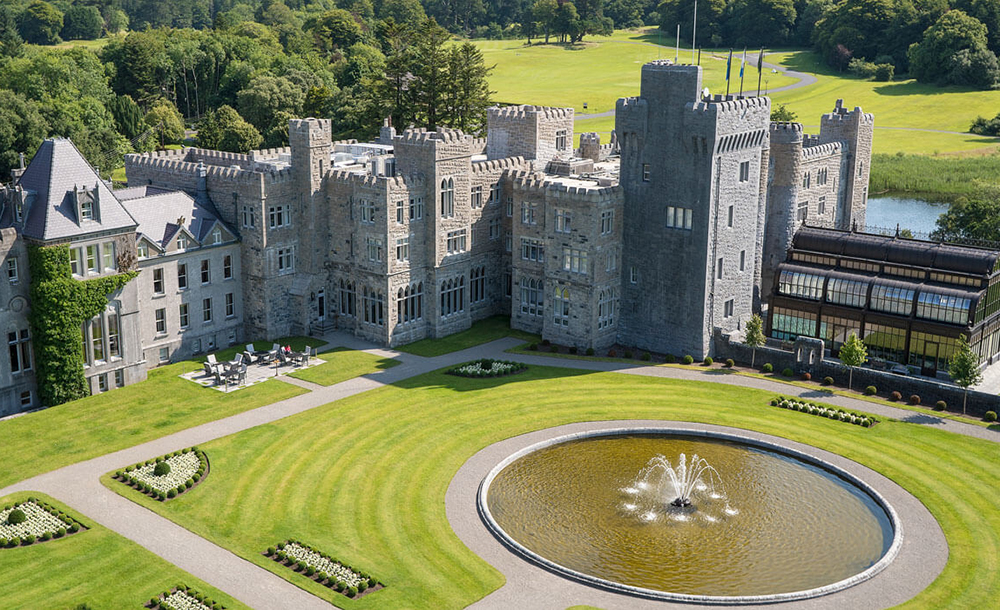 A magnificent 13th century Irish castle located on the shores of the picturesque lake Lough Corrib, the second largest in the country. In the 1800s, this medieval building became the property of Benjamin Lee Guinness, the owner of the famous beer brand, and later – the first five-star Forbes in Ireland. In 1939, the castle began receiving its first guests, and is today considered to be one of the most luxurious hotels in all of Ireland. The rooms are decorated with knightly armor and priceless paintings by medieval artists. Here the classic entertainment of the nobility and modern luxury are wonderfully combined: after hunting foxes, fishing for trout and horseback riding, you can play golf or soak in the spa center, while “The Dungeon” bar welcomes you with its traditional Irish songs performed by famous musicians. 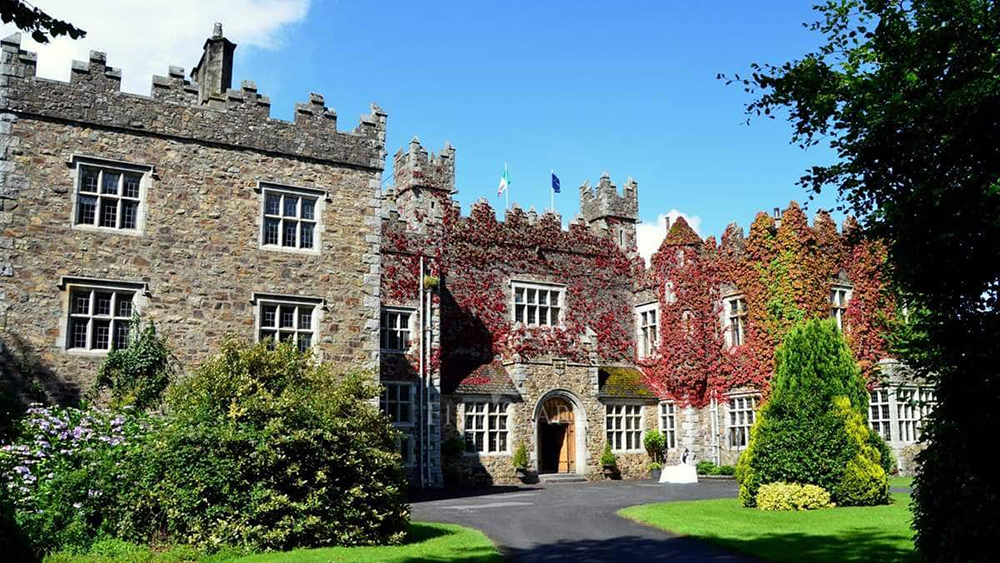 Waterford Castle, built in the 16th century, stands on the Little Island in southwestern Ireland, three kilometers from the town of the same name. The castle was owned by the Fitzgerald aristocratic family of Welsh-Norman origin. The Fitzgeralds have long been the most powerful tycoons and de facto rulers of Ireland. On the familial coat of arms, which hangs above the fireplace in the large hall, there are images of monkeys with which the history of the castle is associated. According to the legend, once, a fire broke out inside, and the monkey, who lived here as an exotic pet, grabbed and carried a baby out of the castle – the only heir of the family, and in honor of this act, the animal was immortalized on the coat of arms. The tree that the monkey used while saving the child has survived to this day.

Next to the hotel, is an excellent 18-hole golf course. Here, you will be offered horseback riding excursions from the castle’s own stables across the island and along the Shur River. Likewise, you can also go spearfishing, fishing, warm up on the tennis court, or explore the area on your own by bike or on foot. 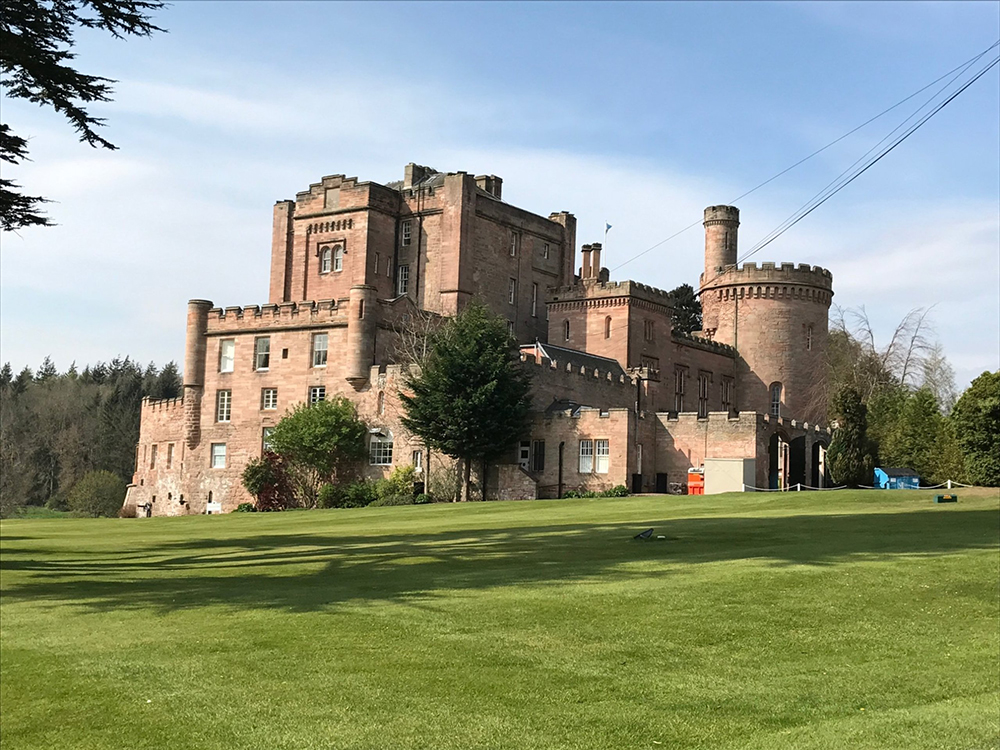 Anyone who has ever been to Scotland knows: if ghosts exist, then you can find them right here. Dalhousie Castle, built in the 13th century, is located in its own 11-acre parkland on the banks of the Esk River, just eight miles southeast of Edinburgh. Ancient legend has it that the spirit of Lady Catherine dwells here, a 16-year-old noblewoman who was imprisoned in the castle in 1695 after she was caught trying to escape with a young groom. The girl died in her tower, and it is said the spirit never left it – even when the castle was converted into a hotel in 1972. Before the Battle of Falkirk in 1298, King Edward I of England stayed in Dalhousie. In 1400, the castle withstood a six-month siege by the troops of King Henry IV of England. And during the English Revolution, Oliver Cromwell placed his headquarters there.

The castle offers 27 rooms, 14 of which are decorated in medieval style, a dining room set in the former dungeon, falconry and a luxurious spa. 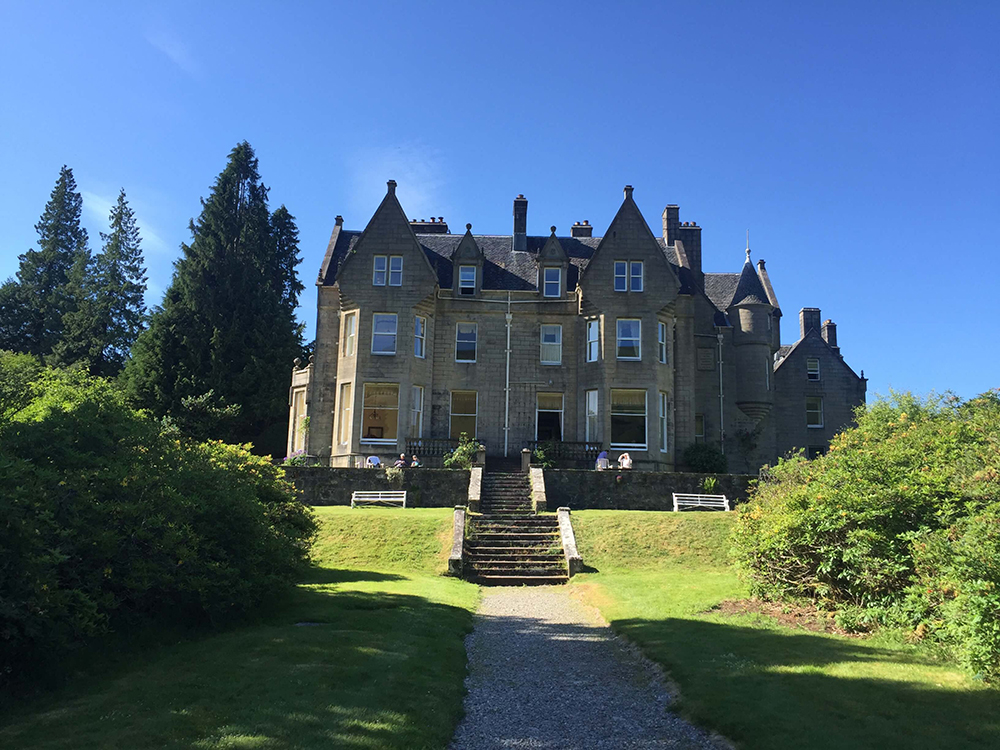 The castle, built in 1869 by the design of David Bruce, is located on the shores of Lake Oich, 11 kilometers from the famous Scottish Loch Ness. If you are a gourmand and want to combine a trip into the past with tasting unique Scottish cuisine, this is the place for you. Decorated rooms, in a traditional medieval style, a picturesque garden and excellent cuisine are the main features of Glengarry Castle. Only here you can try onion omelet with local salmon smoked on oak charcoal, or cherry pie with almonds, and cherry ice cream. 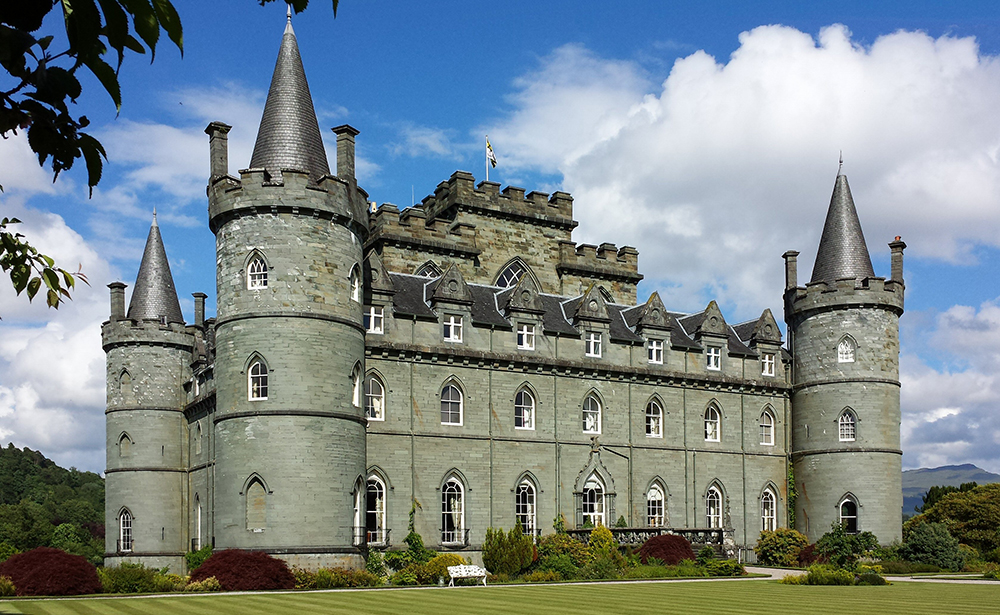 Invergarry Castle, whose history dates back to 1602, is located in Argyll, western Scotland, on the shores of Loch Fyne, Scotland’s longest sea lake. It is one of the earliest examples of Gothic Revival architecture. Since the 18th century, the castle has been the ancestral home of the Campbell family, the Dukes of Argyll. According to tourists, the most beautiful room in all of Europe is located here, it is  the Dining Hall, lavishly decorated with intricate paintings. The castle Armory Hall, in turn, is the tallest hall in Scotland; here, you will find an excellent collection of weapons.

Locals claim that the ghost of a harpist who was killed by order of one of the dukes in the middle of the 17th century has been wandering along the corridors of the castle for several centuries. They say that at night you can hear the sounds of beautiful music, as if drifting from the other world. The second ghost of Invergarry Castle is quite sinister – looking similar to a rook. However, she can only be seen by representatives of the Campbell family, and her appearance always means that one of them will soon die. 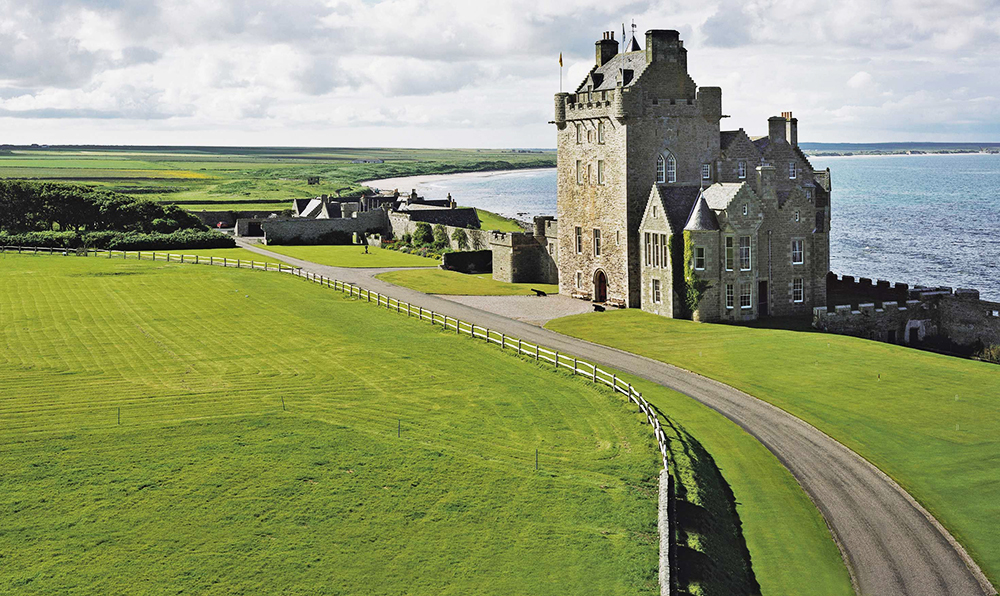 The mighty 13th-century castle Ackergill is located on the seashore in the heart of the Scottish Highlands, surrounded by untouched landscapes. The famous Loch Ness Lake is located 190 km away, where, according to legend, the monster lives. Today, it is a five-star hotel with a reputation as one of the most exclusive venues in the world for corporate events, weddings or private parties. Hollywood stars Jack Nicholson and Michael Douglas, British celebrities Billy Connolly, Twiggy and Jeremy Irons have all been guests to the venue. Ackergill offers its guests an excellent entertainment programme: fishing, golf, falconry, archery and gun shooting, as well as bagpipe dinner, Scottish dancing, a trip to the Old Pulteney whiskey distillery and a campfire night under the starry northern skies. 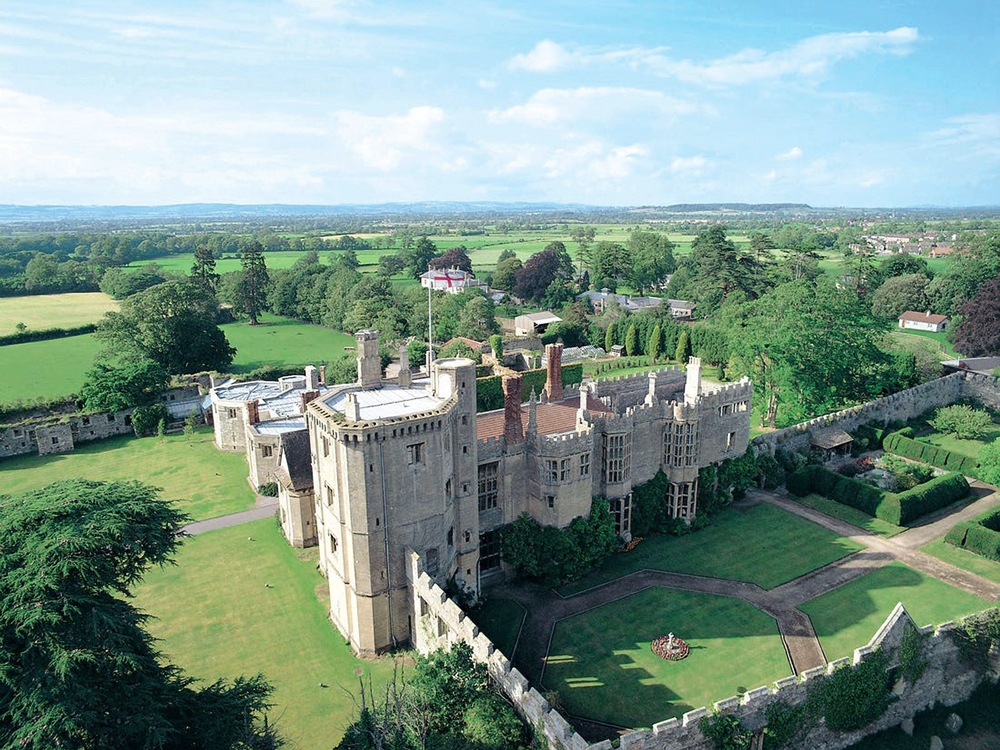 The luxurious castle hotel, erected by the Tudors in 1511, lies near the town of Thornbury in South Gloucestershire, surrounded by elegant gardens and picturesque vineyards. According to the architects’ plans, the castle was meant to be a cozy country house for Edward Stafford, the third Duke of Buckingham, but in 1521, he was accused of treason and executed. The castle passed into the possession of the king. Henry VIII and Anne Boleyn used the venue as vacation home during their numerous visits.

Thornbury has 26 luxurious rooms, each with its own legend. Having settled in them, you can find yourself in the room where Anne Boleyn once lived, or in the apartments of the favorites of Henry VIII. The most expensive room of the hotel was once inhabited by the royal couple. The castle houses the finest restaurant in the country, serving delicious English cuisine accompanied by the finest locally produced wines. 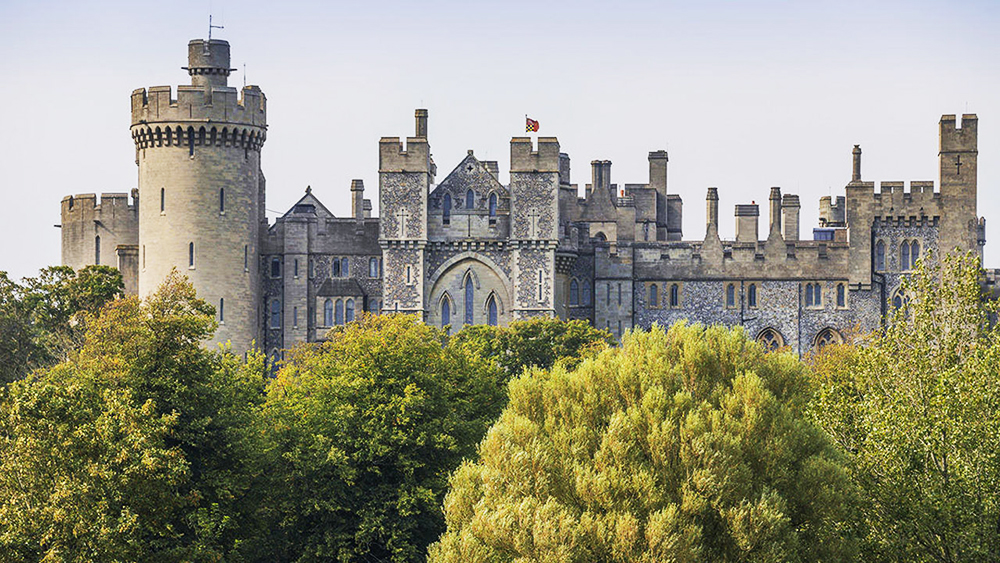 One of the most famous castle hotels in England is located 100 km from London, in the quiet village of Amberley. Built in the 12th century, the castle’s fame comes from King Charles II stay in its walls after the Battle of Worcester, and in the period from 1588 to 1603, it belonged to the English queen Elizabeth I. During the civil war, the castle walls were besieged by Cromwell himself.

It offers 19 luxurious rooms, a gourmet restaurant, an extensive wine list, a cozy fireplace room, an 18-hole golf course, and much more, for an unforgettable vacation. 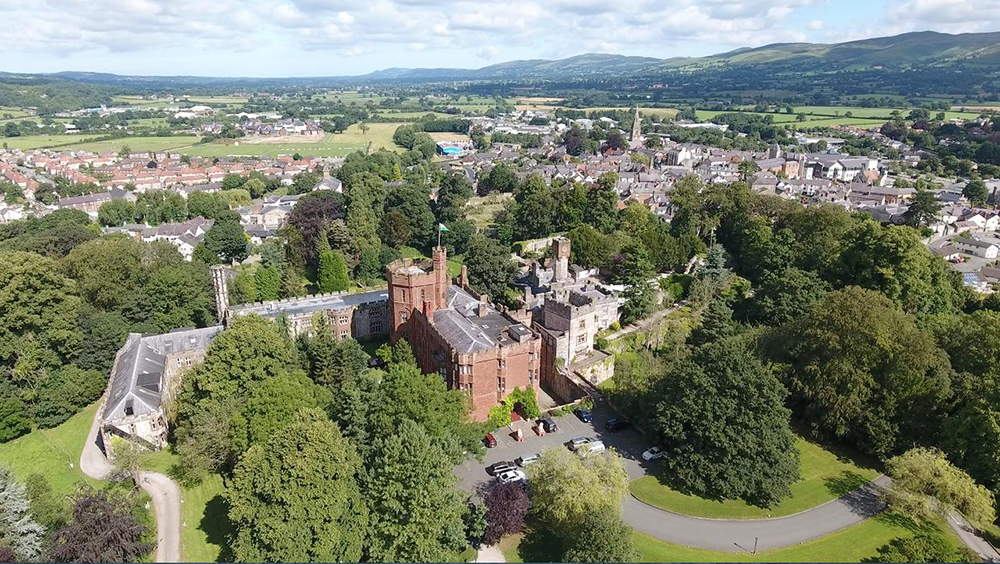 One of the castles of Edward I, built in 1277, is located in Denbighshire, forty minutes drive away from Chester. Previously, it was used as a defensive structure and residence of English monarchs. Here, lions guard the doors and peacocks play in the gardens. The castle is surrounded by a beautiful park and forests. Ruthin is said to have belonged to the infamous Henry VIII, nicknamed Bluebeard, who killed his wives. In the dungeons of the medieval building, there is a torture chamber and a pool, in which people used to be drowned.

But those dark days are long gone, and Ruthin Castle has become a romantic hotel where you can feast just like Bluebeard. The most famous guest of the castle was Prince Charles, who spent the night here before becoming Prince of Wales. At the castle hotel, you can treat yourself with medieval cuisine, or unwind in the unique spa, before falling asleep on your luxurious bed. 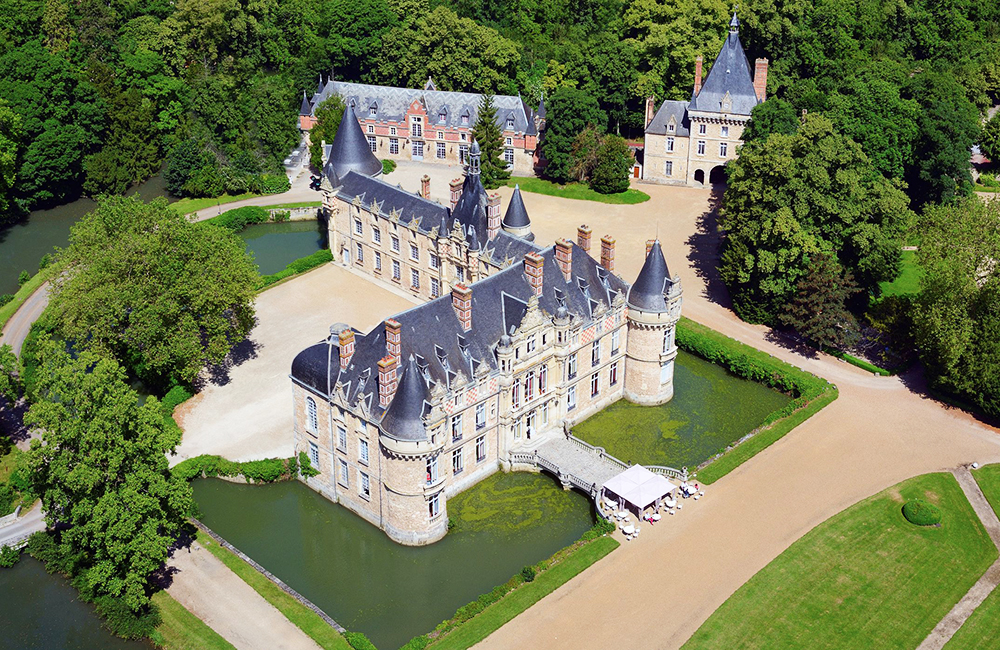 Also referred to as the “Treasure of the Renaissance”, this old residence of the La Rochefoucauld family was founded by Etienne de Ponchet, Archbishop of Tours, in 1543. In the beginning of the 19th century, the building passed into the ownership of La Rochefoucauld, who became its last owners. The castle is located in the Loire Valley, an hour’s drive from Paris, between Versailles and Chartres. Classic interiors of the 16th century, exquisite French cuisine from the La Rochefoucauld gourmet restaurant, as well as over 10,000 varieties of wines from different parts of France, combined with an extensive entertainment program (horse and bicycle rides, hot air balloon rides, archery and musical evenings) will not let you get bored. The castle is surrounded by a unique park with magnificent gardens, a picturesque lake and a moat, and has its own helipad on its territory.