In what country are Mercedes-Benz manufactured? Who won the Battle of Waterloo? Answer without hesitation! However difficult it is to remember these details today, it is comforting to know that all of the necessary information can be extracted by the stroke of a finger across the screen of your smartphone. So, we can save space in our “grey matter”, freeing up space for other things, whatever they may be. It just seems that the chances that other things will appear are less and less every day, as if there is an epidemic of mindlessness and the appearance of digital dementia that has become a threat to the young intellect.

Disharmony of the Hemispheres

Digital dementia, as a diagnosis, first became a taking point in South Korea. The teachers were alarmed and children’s education and development seemed threatened. Students in the most “digitised” country in the world were overcome by laziness and absent-mindedness. Their memory and performance deteriorated. In adolescents, they began to display signs of aggression, depression and isolation.

As shown by studies conducted in 2007, from the Institute for Brain Problems in Seoul, users of electronic gadgets actively work the left hemisphere of the brain, responsible for logic and analytical thinking, while the right hemisphere, responsible for intuition, imaginative perception and spatial orientation, remains underutilised. This imbalance leads to abnormalities that are characteristic of the consequences of Craniocerebral Trauma and the early stages of dementia. That is, against the backdrop of the complete spread of digital technologies, old age dementia has been rejuvenated!

It is impossible to stop the locomotive of technical progress. The task is to be at the helm, not under the wheels, and to help to do this for the children. Psychiatrists, neuroscientists, teachers and doctors never tire of detailing the problems of digital dementia in the media, in books and in academic journals.

Professor of Oxford University, member of the House of Lords and famous English neuroscientist Susan Greenfield suggests re-engineering the software, so that it is capable, like books, of encouraging the development of sustainable attention.

For Manfred Spitzer, a German psychiatrist, teacher, director of the University Center of Psychiatry in Ulm and author of the bestselling book “Digital Demetia: What We and Our Children are Doing to our Minds”, the topic of internet addiction is fascinating, as a specialist and father of six children.

Doctor of Philosophy Arik Sigman, preschool education teacher Sue Palmer, U.S children’s doctor Chris Roone and other devotees never tire of giving figures, collecting facts and reminding the powers that be, whether businessmen, politicians or ordinary citizens (who are mostly parents), about the hidden dangers of digital technologies.

These energetic, talented people, of course, use the internet. They recognize that popular “gadgets” speed up access and make life easier. However, mobile phones, tablets and computers, with overuse and obsessive attention, can cause irreparable harm. The task for adults is to remember this and to teach children safety techniques.

“The soul takes the color of your thoughts” (Marcus Aurelius)

A classic recipe for internet dishes involves a pinch of meaning, most importantly italics, and a restrained flow of information. The average user does not like large paragraphs and does not absorb more than 20% of the screen text. A couple of initial lines are read and then a quick scan to the middle normally takes place, grabbing snippets of several sentences at a time. Finally, it is quickly down to the end to find out the conclusion. This meagre diet negates the skills of critical thinking, mental efficiency and emotional engagement.

From scattered fragments, a network user hastily collects a collage and puts it on display on social networks. Why read thick books, pore over abstracts, delve, understand or form your own opinion when everything is so simple? A few short comments and a selection of emoticons and they are ready for posting.

Do Not Study “Badly”!

Inventor Edison, at the beginning of the 20th century, claimed that books would soon disappear under the pressure of cinema. The hopes of the 1950s to shift educational functions to television also did not materialise. Also, ideas like “lingua-phone rooms” or “training in a dream” were never tried.

Today, the computer threatens to crush the foundations of the old school, with its books, notebooks and color pencils. In the past, graduates passed exams in seven or eight subjects. Now, students can hardly cope with three! Why?

Modern technology allows you to see how the state of the brain changes as a result of lower mental loads. The science has been proven and our brain is in need of constant training to function optimally.

Experience – A Simulator for the Mind

A twitching of the shoulder was the reason for the failure of Demosthenes‘ first public appearance. A tick gave out the uncertainty of the young philosopher. So, the young man hung a sword from the ceiling and, rehearsing, stood under it so that, with each involuntary movement, the point would painfully hurt his skin. A few months later, the disease disappeared and Demosthenes went down in history as the greatest orator. 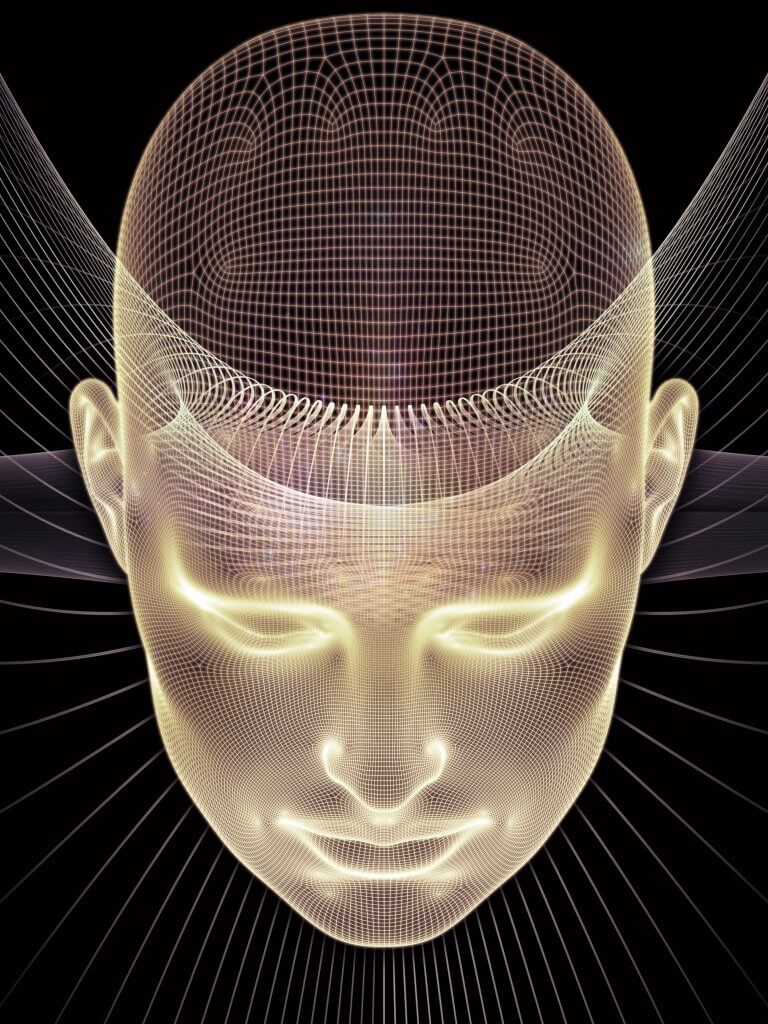 Insight In Mind series. Creative arrangement of human head rendering and conceptual element as a concept metaphor on subject of brain, thinking, science, technology and education

The ability of the brain to adapt to life under the given circumstances was first described by the philosopher Alexander Bain in 1872. The Spanish anatomist Santiago Ramon y Cajal called this skill “plasticity”. The brain learns and creates models, using them as responses to external events. A sword stab or a touch of a hot iron is a lesson and an experience.

The brain evaluates the situation, remembers and gives the command to respond. The more events to process, the more reasons to weigh, evaluate and remember. The more memorable neural paths run through the grey matter, the higher the level of intelligence. This “computer”, in turn, works in a mentor mode, ready to repeat, without end, that it is dangerous to poke your fingers into the power outlet. To respond to a statement of fact that is not backed up by a history of events, the brain has neither the will nor the motivation.

Time and space: In such a sequence, a psychiatrist finds out whether everything is in order with a man and his mind. Establishing knowledge of name, age and location is a good starting point to determining whether personality problems exist. Losing basic skills means leaving the company of adequate mental health.

There is little cost, however, to losing spatial orientation because the car navigator is at the ready, it would seem. When the device breaks down, the city, familiar from childhood, seems to be lost in a fog. Even the names of streets can hardly be remembered, let alone the routes.

It’s time to train the hippocampus! Cells similar in shape to a seahorse, from a pair of organs located in the temporal parts of the brain, record once performed actions, thankfully for musicians who remember the notes and arrangement of keys or jugglers who recall the trajectories of flying clubs. Even taxi drivers remember street schemes using this part of the brain. The amount of memory can be measured, as the storage increases or shrinks, depending on the amount of information. So, remember your poems, capitals, addresses and phone numbers and digital dementia will be no match for your muscular and pumped-up grey matter.

Hanging around in digital networks takes away time from sleep and reduces the mental productivity of children and adults. His Majesty the Brain needs rest. True, even in his sleep, he works – he digests the experiences accumulated during the day.

The process is comparable to sending an e-mail. Letters from the mailbox (hippocampus) fly away into the darkness, where they fit into folders. The brain, then, processes the correspondence and forms answers. Sleep soundly and, perhaps, in a dream, you will come up with something as ingenious as Mendeleev‘s periodic table.

Less Time on Google and Come down from the Clouds

The fascination with cloud storage of information deprives the brain of motivation to memorise something new. Information is packed in a box and stacked on the shelf and, at any time, you can retrieve it, but when the cloud suddenly dissolves, important things can be lost.

The process of learning, for an adult, is the joining of new information to already available information. It is useful to scroll, in the mind, for an unresolved problem, evaluate it from one angle, then from another. Working on the unfinished intention allows you to better remember the events.

Look at the Eyes

A seven-year schoolchild, in his/her short life, spends more than a year staring at screens (a TV, a smartphone, a tablet). A teenager, if not asleep, often spends inordinate amounts of time on social networks. These precious hours are not spent reading books (paper, not electronic), having heart-to-heart talks, playing football, jumping in puddles or sailing in boats. Virtual communication inhibits the development of brain areas responsible for social thinking. The result is a lack of experience with empathy, helping and participation. Video games replace live communication. Where can one go to attend the school of friendship or to share secrets?

The personalities of boys and girls are formed when they explore the world in reality, so aim to communicate, invite guests over and maintain family relationships and friendships. For children to make the right choices, they should have options. Music, sports and applied, artistic creativity should be tried and enjoyed. The best gymnastics for the mind involves those things difficult to imagine.

The pillars of the digital industry are also parents who will honestly share personal secrets of survival in the era of digital dementia.

Strictly control the amount of time that children are in contact with new technologies. Gadgets at night or dinner with a smartphone on the table should be taboo.

Screens and gadgets from the bedroom down! A habit of overuse of the internet is harmful for the psyche. I have felt it myself. I want to save children from such problems.

My two sons strictly abide by the rule of holding onto a tablet (smartphone) for one hour-a-day and no more.

For children, 10-13 years of time with a tablet and/or a computer is half-an-hour a day. For my five-year-old son, gadgets are banned.

Do not be afraid that your child will be left behind by his/her peers. Limit his/her use of a computer, a smartphone or a tablet. Better yet, do not buy gadgets until the child properly develops his/her mind, advises Manfred Spitzer.

Adult digital dependency “viruses” and digital dementia are not so scary. Living in a time when there were no electronic toys, they are at an advantage. Still, it is recommended, at least, to sometimes travel without a navigator. Playing sports would also be beneficial. Finally, take a book from the shelf, write a letter to your parents or recite, by heart, your favourite poems. The benefits will astonish you.

The mechanism of relationship, or How to find yourself and not get lost anymore
17/01/2021

The body in the case, or how to comfortably get rid of the “uncomfortable” kilograms forever
26/05/2019