BMW X5. Perfection on the road

The new BMW X5 represents the fourth generation of crossovers; a tall, elegant and powerful car that cannot be missed on the road.

The new “X”, with the internal code G05, is the first model with a redesigned interior architecture. The wheelbase increased by 42 mm, the body length – by 36 mm, and, most notably, the crossover became bigger in the shoulders – by 66 mm, for a total of total 2,004 mm, excluding mirrors. This is the first BMW more than two metres wide!

The front is highlighted by a massive integrated grille, large headlights and powerful air intakes. The headlights are now separated from the radiator grill, and the “nostrils” themselves are noticeably increased and visually united with each other. Active blinds are hidden in the “nostrils”, which open only when additional cooling of the motor is necessary. Tail lights are narrowed and horizontally oriented. 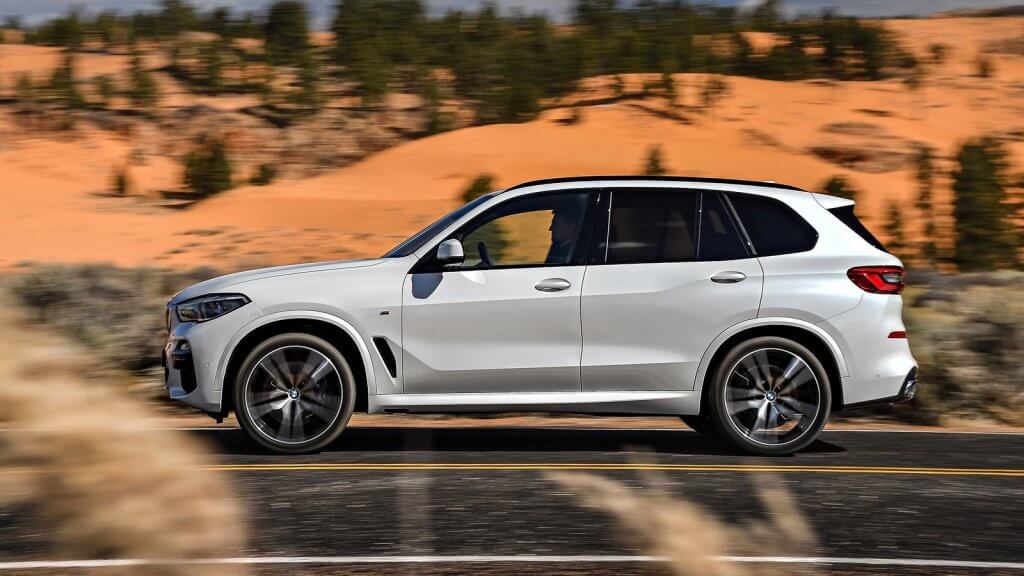 The crossover has a double wishbone front suspension and a back five wishbone suspension, but the main thing is the appearance of optional air pneumostack struts on both axles (before, they were placed only at the rear). This is exactly what X5 clearly lacked in a dispute with competitors – Audi Q7, Porsche Cayenne and Mercedes GLE. For the new BMW X5 G05, in addition to the M Sport package, an off-road xLine package is proposed, which provides special decor, enhanced underbody protection, a rear differential lock and an additional set of control electronics modes.

An important event was the appearance of a special model of the line – the new BMW X5 M50d. It is powered by M Performance TwinPower Turbo 6-cylinder diesel engine that delivers all of its power to the road with the M Professional adaptive suspension. In addition to the M Sport package, which is included in the standard equipment, it includes an understated suspension with tighter settings, a different exhaust system, more aggressive bumpers and body-coloured trim. The large, polished 22ʺ V-Spoke 747 M alloy wheels accentuate the distinctive features of the Cerium Gray exterior. Sport and Sport + modes make the optional M Professional adaptive suspension stiffer and sportier.

At the start, four engines are offered for the new BMW X5. Diesel models are available in two variations of the xDrive30d and X5 M50d.

The diesel xDrive30d is equipped with a three-litre, six-cylinder engine, developing 265 hp. and 620 Nm of torque. From standstill to one hundred km/h, this modification accelerates in 6.5 seconds, and fuel consumption varies from 6.0 to 6.8 litres per 100 km. The maximum speed is 230km/h.

The BMW X5 M50d version is powered by a 3.0-litre diesel engine equipped with four turbochargers, squeezing 400 “horses” and 760 Nm of torque. Acceleration to one hundred km/h in 5.2 seconds (0.1 faster than its predecessor), top speed is also limited, and the flow rate varies from 6.8 to 7.2 litres.

The more powerful version of the X5 xDrive50i comes with a 4.4-litre gasoline turbo engine V8 (4.4 V8) for 462 “horses” and 650 Nm. Such a crossover travels to the first hundred km/h in 4.7 seconds, and the maximum speed is electronically limited at around 250 km/h, but the corresponding fuel consumption is 11.6ℓ/100 km.

The leader of the line is the X5 M50i, with a petrol 4.4-litre, V8 rated at 530 hp. and 750 Nm. This option travels to one hundred km/h in 4.3 seconds (when starting with Launch Control), and in its equipment appears a retuned suspension with adaptive shock absorbers and a rear differential M Sport with electronically controlled locking. 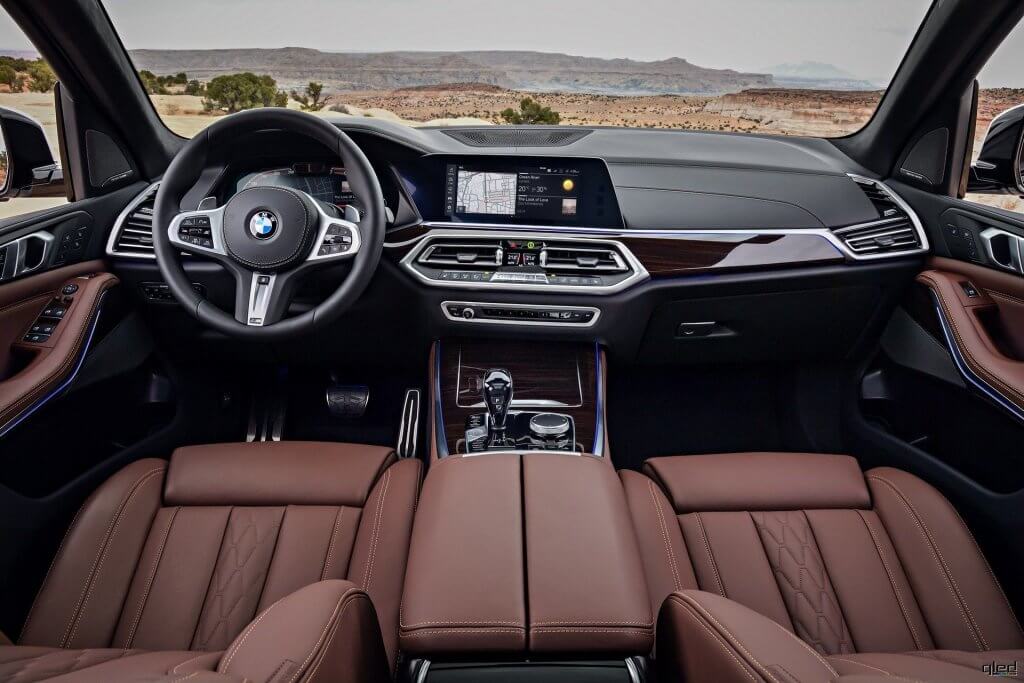 The interior is luxury, ergonomic and fitted to the limit with modern electronics. Here is a new steering wheel hub, an electronic instrument panel on a 12.3-inch display and the screen of the iDrive 7.0 multimedia system, with the same diagonal, with its left part attached to the tidy visor. There are new original door opener handles, the rotary light switch was replaced with a button unit, the location of the window buttons was changed, and the dashboard and centre console were reorganised, where a new gearbox selector appears. The panoramic glass roof of the Sky Lounge, air aromatisation systems with four different natural aromas and comfortable lighting all create a special atmosphere. Bowers & Wilkins Diamond Surround Sound delivers studio-quality sound while driving. In the trunk, for an extra charge, two seats can be placed, allowing you to make a seven-seater car.

The interior presented in the M50d package is distinguished by a combination of sporty style and exclusivity. High-quality materials, such as fine-grained BMW Individual Merino leather in Tartufo colours, BMW Individual dashboard leather trim and Tetragon Aluminium trim strips, create a sporty atmosphere. 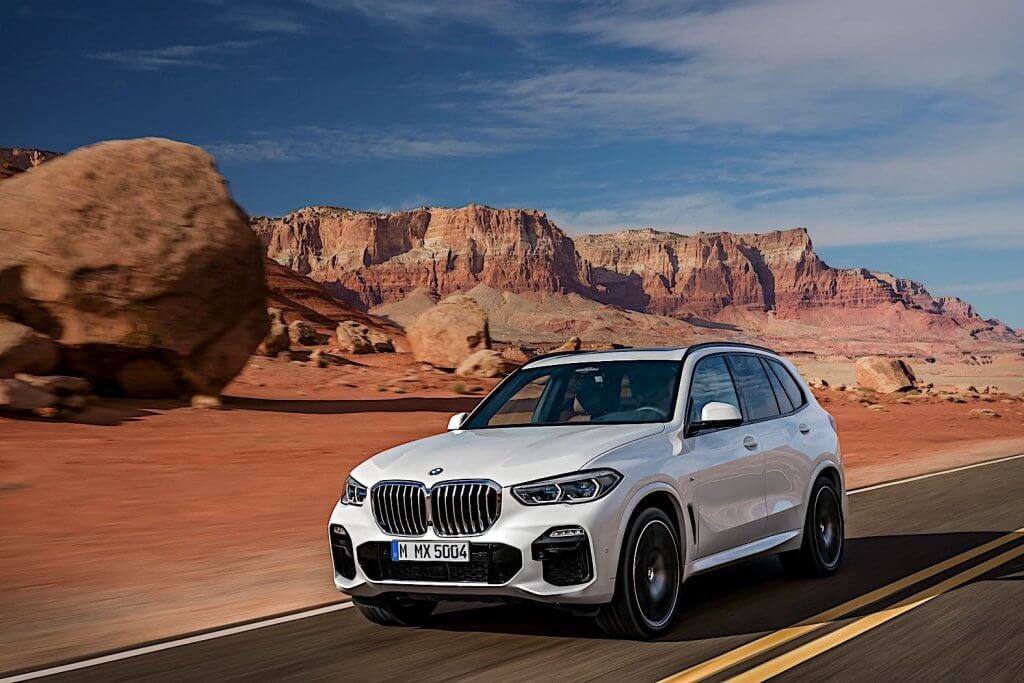 The innovative BMW 7.0 operating system greatly simplifies controlling car functions, with gestures, voice commands, a touch screen and an iDrive controller – this can be done completely intuitively. BMW X5 introduces the latest generation of BMW telematics technology, including the Connected Professional service package. With the new software, all updates are transmitted wirelessly, as to a smartphone. The Bavarians taught the car to remember the trajectory on the last 50 metres of traffic – provided that the speed was not higher than 50 km/h. And, if you understand that you can’t go further (blocking the road, an accident; you never know what!), then the automation will take the X5 back in its tracks without the participation of the driver.